From The Present-Dent To The First

From the present (president) to the first.

On Feb. 24, 2009, I listened to the “non-state-of-the-union” speech. I have read about, listened to and watch President Barack Obama since he gave a keynote speech at the democratic national convention in 2004. What a “breath of fresh air!”

Do I always agree with him? No. Have I always respected his opinion? Yes.

Do I think he can solve all problems? No. Do I think we have a good chance of solving any particular problem under his leadership? Yes.

I think our present president is a protege of our first president, George Washington, and not necessarily Abraham Lincoln, who most seem to want to compare him to.

Of course, Washington wasn’t entirely responsible for the forming of our “perfect union,” but he was our first leader. He did hold the responsibility of leading our country at a time of crisis. AND, Washington had to lead our country through a systemic change – more so, in my opinion, than Abraham Lincoln. President Obama now has so many different “fronts” to lead us through, that his proverbial plate is as full, new and complex as Washington’s.

Now, I know there has been some press, what I assume is satire, regarding the comparison of President Obama to George Washington. One that comes to mind was the picture on the New Yorker last Summer. Here is the picture that many people took in different ways. 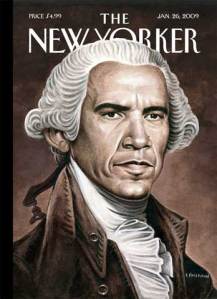 Personally, I prefer the picture at the top of this blog. To try and “blend the two together” is like mixing two different histories. The result is just that – a mixture that doesn’t reflect either one correctly. My comparison is just – a comparison. President Obama is the present and George Washington was our first. From the present to first. They are like two bookends that hold a diverse collection of books (presidents), in between. PRESENT-DENT OBAMA! :-)

← Who Do You Have To Live With?
Spring Has Sprung – Spring Potpourri! →