Do You Believe Your Compliments?

You are such a good worker!

What is your usual response when you receive a compliment? Is it the same response you have when you receive criticism? I know people often have trouble receiving, or should I say, accepting criticism.  I did a posting on criticism last March and discussed whether or not criticism is good. At the end of the posting I made this statement, “So, is criticism good? Yes, provided it is given and received in a positive manner.” In a sense, I think that we could replace criticism with “a compliment” and also have a meaningful statement.

So, how well do you receive compliments? Do you receive them in a gracious and thankful manner? If you want to empower yourself and raise your self-esteem, then how you receive a compliment is important. I have given compliments to many people who have responded with a statement that was, more or less, a put-down to them. They often make me feel like it was foolish for me to compliment them. They make me feel like the compliment wasn’t deserved and that it was foolish of me to make such a positive statement. Really, in my opinion, they put themselves down. Why?

So, specifically, what am I writing about? Well, suppose I compliment someone on how nice their hair looks and s/he says, “It’s so humid today that my hair looks frightful.” How about when I say someone did a great job on “whatever,” and s/he says, ” Oh, I was just lucky, it was nothing.” Or, if I say, “Your house looks nice,” and they respond with, “I really haven’t had time to do anything to it.” What do these statements tell me? I think they reflect someone who is confused with the concept of humility and denigration. Denigration of oneself, that is! 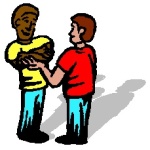 You are a very good person!

Accept your compliments the same way you accept something you desire, with thankfulness and gratefulness.

← Have You Entered The World Of Entropy?
Do We Really Have A Choice Under America’s Current Health Insurance System? →