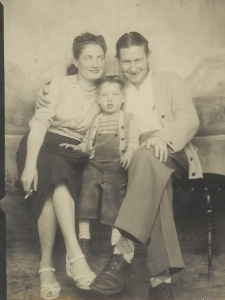 This picture was taken when I was two and shows me with my Mother and Father. Yes, that's a cigarette in her hand. :-)

Many years ago I wrote a poem about my parents, entitled: “When.” It was written five years after my last living-parent, my mother, had died.

The structure and format of what I wrote came from a William Blake poem, entitled: “The Chimney Sweeper.” After reading the first two lines of The Chimney Sweeper, “When my mother died I was very young, And my father sold me while yet my tongue…,” I immediately knew what the theme of my poetic tribute to my parents would be. The poem I wrote is at the end of this post and I’m sure you will see Blake’s flavor, at least at the beginning. 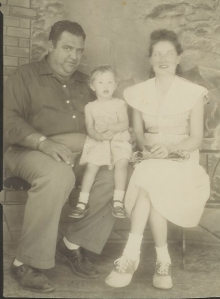 This picture was taken when my sister was two (I'm not in the picture) and with my Mother and Dad (step-father).

For some background information regarding my parents and to help you better understand what I wrote, here is a little history. My father died when I was five years old and my mother remarried. Therefore, I have had two “Dads” and one Mom. Chronologically, my father died in 1951, my step-father in 1971 and my mother in 1989.

I’ll readily admit that I was feeling somewhat nostalgic for a few years after my mom died and that added to my inspiration for the verse. The poem was written in 1994 after my wife and I had visited some of her extended family in Greece. I did a post inspired by that adventure, where I tried to verbalize how my interactions with the Greeks changed my thinking regarding the way I prioritize the important aspects of people when I initially meet them. Please click here if you would like to read the post. I felt even more nostalgic after that family trip.  On approximately the five-year anniversary of my mother’s death, this poem was created.

A new picture of my Dad from my "newly discovered" sister. Thanks, Sandy!

Since I wrote the poem, I’ve had an interesting and delightful encounter with a sister that I didn’t know existed until two weeks ago. Trying to write about this encounter seems a bit unreal, but here’s how it happened. My son was driving in from Kansas City, MO, to visit, and due to being caught in a traffic-jam, turned off of I-70, one exit sooner than he should. Having noticed that the exit he used was the same as the one that led to where his grandfather was buried, he decided to visit the grave before continuing his trip.

When my son arrived at the grave site of my father, he noticed a note in a plastic bag near the grave. On the note was contact information about a daughter that my father had before he married my mother. When my son arrived at my home and handed me the note, I immediately contacted my newly discovered sister. We have had a delightful beginning of what I hope is a long and close relationship. As you can most likely imagine, this poem has even more meaning now than it did when I wrote it.

This tribute poem, was and is, an attempt to emotionally describe my thoughts regarding these three important people in my life. Please note that, in the poem, I refer to three parents — Father, Mother and Dad.  Dad is my step-father.

When my father died, when my dad died, when mother died – If not for when, what would I be now?

When my father died I was very young,

And my mother told me while yet my tongue,

Let out so little noise of weep and sorrow,

I thought today was no different from tomorrow.

When my dad died I was young in years,

And my mother told me while yet my ears,

Heard much about the noise of sorrow,

I thought today was less than tomorrow.

When my mother died I was working fine,

And my sister told me while yet my mind,

Felt much about the loss and sorrow,

I thought today was made for tomorrow.

When tomorrow arrived I was here today,

And myself told me while yet I pray,

That so little is known about my sorrow,

For I thought today was my tomorrow.

← Why Focus On Yourself?
Good Grief, What Are The “Good Old Days?” →