Is This Awe About God? 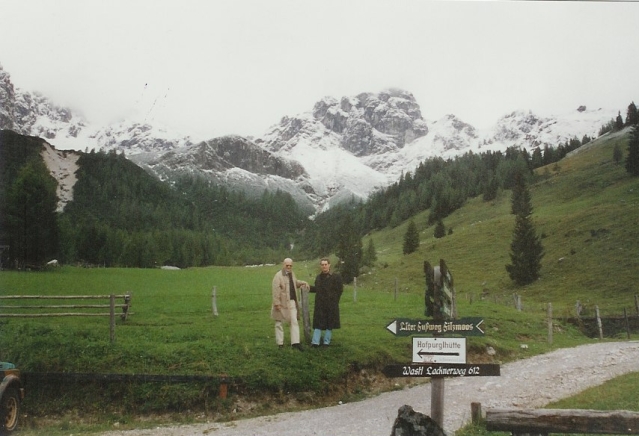 R2 (on right) and cousin use the "awesome" view of the Alps from outside Filzmoos, Austria as a backdrop.

I’ve heard that many people who attend church and believe in God, get a feeling of awe and know they are in the presence of God while at church. I don’t doubt they think and/or believe that God is the cause of their awe, but I know I have had such feelings when I’m nowhere near a church. Is this awe about God?

Does the presence of God cause a feeling of awe while in church?

As I have stated in an earlier post, I’m unsure of what to believe regarding God and religion and therefore, assume I’m agnostic. In fact, I wrote that post attempting to explain my beliefs or lack thereof. I have also written two posts where I simulate a dialogue between an Agnostic and a Born-Again Christian. In those two posts, I take the role of the agnostic. If you would like to visit those posts, please click here for part A and/or here for part B. Perhaps, my point of view is the cause of my disbelief. Or maybe, my disbelief is the cause of my point of view. What an aweful dilemma. :-)

Let’s explore this feeling of awe. I’ll admit that when I attend a church service and the congregation is, in unison, chanting and singing, that I get a feeling which is best described as joy, glory, or yes, awe. Now, when I see a majestic mountain, a beautiful rainbow or a painted desert-scene, I also have an awesome experience. Were those awe about God?

Of course, all of my experiences mentioned previously are the “direct products” of Mother Nature and, often times, are directly attributed to God. But, what about the feeling of awe that I have when I see the St. Louis Arch? For example, I had a feeling of awe, last Spring, when I attended a wedding reception at Kemoll’s Restaurant (Top of the Met), in downtown St. Louis and viewed the Arch from the 42nd floor of 1 Metropolitan Square. (Below, is a picture of my view of the Arch)  Another, but different example, is the awesome feeling I have when I see a good uplifting movie? My point is that just because a feeling of awe is experienced, there’s no way for that to be “proof” of the presence of God. Of course, it could awe be about God. I don’t know, but God knows! :-) 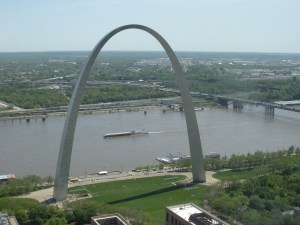 View of St. Louis Gateway Arch from "Top of the Met," the banquet facility operated by Kemoll’s Restaurant on the 42nd floor of Metropolitan Square. An awesome sight!

Before I go any further, allow me to explain my feeling of awe. It isn’t always the same and words seem inadequate. Sometimes, there is a sense of light-headedness. Sometimes, there is an overpowering sense of warmth going through my entire body. Sometimes, it is an uncontrollable urge to smile. A specific example where I had all three of the previous descriptions of awe occur was when I saw the majestic Alps from the small ski village of Filzmoos, Austria. Are awe the Alps about God?

My wife and I visited Filzmoos in September of 2001 with relatives who usually visit the village during ski season. Of course, there wasn’t any snow in the village at that time of the year, but the mountains that surrounded it were snow-capped and “awesome.”  That visit stands out in my mind as a time when I had this feeling of awe. Was our visit awe about God?

When I visited the Chapel of the Holy Cross, in Sedona, AZ, I had an "awe" filled experience. Sedona is known for being spiritually up-lifting.

I knew, while I was in Filzmoos, I would most likely never experience anything quite like that “awe” again. (NOTE: The picture at the beginning of this posting is a small example of what I saw, but it definitely doesn’t capture the entire feeling.) Of course, I have had and will have more feelings of awe, but I’m sure they will be considerably different from that one. Was this feeling reflecting the presence of God or the presence of an uplifting sense of self where I felt this was a unique special time in my life? I think the latter. Was our awe-filled experience about God?

I can understand how, due to the lack of being able to explain exactly what causes them, we might attribute these feelings of awe to a higher being. The agnostic in me allows for a response of: “I just don’t know.” On the other hand, it does not allow me to rationalize that such feelings are proof of a God’s presence. I’m in awe of what I don’t know!

Hindu has three aspects of a universal God - Brahma, Vishnu and Shiva. Are they "awe" about God?

Should I have all of these doubts and still have it awe about God?

What do you know about your feelings of awe? Are they “awe” about God?

← Are You Right When You Admit You’re Wrong?
BUT, Can Changing Just One Word Make You Friendlier? →

1 Comments on “Is This Awe About God?”