How Can I Emotionally Cleanse Myself Of Grief? 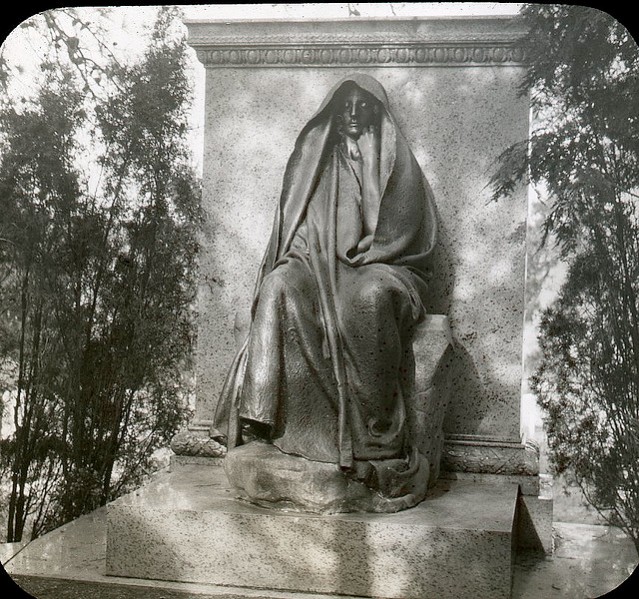 Henry Adams asked Augustus Saint-Gaudens to create this memorial to his wife who committed suicide in 1885. It is located in Rock Creek Cemetery and is often mistakenly called the “Grief” statue.

A friend and former student of mine, Dr. Funda M. Gulmen, published an article (to read the article click here and go to page 18) in Natural New Haven, the Natural Awakenings Magazine for New Haven and Middlesex Counties in Connecticut. The article was entitled, “Emotional Cleansing,” and after reading it, I realized that emotional cleansing is exactly what I need. As some of my readers know, my son died on June 22, 2011, and since then, I have had an abundant supply of emotional baggage dragging me down. Dr. Gulmen is a Facebook friend of mine and on September 5, 2011, she posted a link to her article. Since then, I have been trying to write this post.

Ok, that gives you a little background about where and when I began my adventure down the path of cleansing myself emotionally. But, how can I do it? You see, I’m still on the path and haven’t reached the destination of “being emotionally cleansed.” I think it’s reasonable to assume that when someone is wanting to emotionally cleanse himself, he should focus only on the negative emotions. For example, cleansing the mind of fear would be desirable, but cleansing the mind of courage would not be a desired goal. So, as I use this forum to cleanse my emotions, I will focus on cleansing those that I consider negative and increase those deemed positive.

“When you are sorrowful look again in your heart, and you shall see that in truth you are weeping for that which has been your delight.” -Kahlil Gibran

In her article, Dr. Gulmen talked about the need to release negative emotions. A part of her article was sub-titled, “Speak it…Write it…Draw it…,” which referred to the cleansing and healing aspect of bringing emotions out into the open so they can be viewed more objectively. For example, if I talk about the emotions that are causing me pain, then I (and others who hear me) will be able to put them in perspective. Recently, after talking about my feelings related to my son’s death, I realized most of what I was feeling was self-pity. I felt sorry for myself! When I came to that realization, (before then, I thought I was feeling sorry for my son) I immediately felt relieved. Of course, I have lost something near and dear to me, but self-pity is not something I want or need to feel.

The “Speak it” part of “Speak it…Write it…Draw it…” has already helped me. In fact, it seems that coming to the realization of the specific negative emotion I was feeling and bringing it “out into the open” through verbal expression, allowed me to see it for what it really is — an unnecessary emotion. Since it’s unnecessary, I feel good about not feeling it. :-)

“Grief is the agony of an instant. The indulgence of grief the blunder of a life.” -Benjamin Disraeli

Yes, the “Speak it…” has helped me, but for those of you who have been reading my blog on a regular basis, you most likely know that one of my main goals is to use this as a “writing for learning” exercise. Therefore, for the rest of this post, I will focus on the “Write it…” part of emotional cleansing. Regarding the “Draw it…” part, suffice it to say that I’m not very good at drawing and feel that my best chance of emotionally cleansing myself will be through writing-it.

Perhaps, one of the first considerations I should address is the question: “What will my newly cleansed-mind contain?” You see, I cannot keep by mind free of emotions. How can a human have no mental feelings? Emotions are mental feelings and to say a live human has no mental feelings is like saying a live human has no heartbeat. Impossible! I believe we are all full of emotions. Just as our bodies have feelings, so do our minds. Our minds are full of feelings such as desire, anger, fear, guilt, joy, hatred, pride, distress, love and of course, grief. Considering the title of this post, you can most likely deduce that the emotion I want to be cleansed from my mind is grief. So, what will remain in my mind, after it has been cleansed of the negative emotions? I propose that, for sure, it will contain the only emotion that’s always with us, LOVE!

“Contrary to popular belief that it’s selfish to love yourself, this is just so not true. We cannot give what we do not have.” -Anita Moorjani

You might wonder where that last statement came from. Recently, as I was doing research for this post, I came across a testimonial from Anita Moorjani. In 2006 she was given 36 hours to live. She was dying of Hodgkin’s Lymphoma and was in a coma. The rest of her story is not only miraculous, but also educational. Please click here for more details. A fundamental idea I gleaned from her story was that we shouldn’t live our lives in fear and that love is the core emotion for all humans. Love, as the core emotion for all humans, is on one level, easy to accept, but on another level, difficult. It is difficult because, at least in the English language, the word love has many differ meanings. For example, love can be used to describe a strong desire, a romantic feeling, a tender affection, etc….

So, what kind of love is the core emotion for all humans? I wrote a post in October of 2010 entitled, “What Is This Thing Called Love?” and tried to pin-down the meaning of love as I see it. Well, if you read the post (to visit the post click here) you’ll quickly find out I wasn’t exactly successful in giving a succinct explanation. I eventually came to the conclusion: “love can only be explained by the person who asks the question. In other words, the meaning of love is entirely created and exists uniquely in the mind of each individual person who seeks the meaning of love. Like ‘art is in the eyes of the beholder,’ this thing called love is in the mind of the beholder!” At the present time, love is going to remain an emotion that is left undefined by me.

“Grief is the price we pay for love.” -Queen Elizabeth II

Ok, so I need to emotionally cleanse myself of the negative emotions associated with MY grief. I emphasize MY because not everyone will have the same negative emotions when grieving. For example, many who are grieving feel anger, but I do not. In fact, for a while I was bothered by not having anger toward someone or something. I thought that if I would become angry at someone or something, then I would be able to eliminate the pain I was feeling by expressing that anger. Of course, now, as I look back on that kind of thinking, it seems a little silly. So, what negative emotions associated with my grief do I need to cleanse from my mind?

The following list contains the negative emotions related to my grief. Most likely, the list isn’t complete. I’ve also provided a specific example of how each emotion is “felt.”

“Excess of grief for the dead is madness; for it is an injury to the living, and the dead know it not.” -Xenophon

Guilt– for example: I’m living and my son isn’t.

Fear– for example: Fear of not handling his estate the way he would have wanted me to.

Inadequacy– for example: I cannot keep his memory alive in his children.

Apprehension– for example: Apprehension about carrying on his legacy in a respectful and meaningful manner.

Anxiety– for example: Anxious about the future without him.

Regret– for example: Not questioning more regarding the medical care my son received after his accident.

These six emotions are probably not the complete list associated with my grief, but after putting them into words and thinking about them, I will admit that I already feel a sense of relief. Each one, in one sense, seems unnecessary and therefore, easier to “get rid of.”  The key, I think, for cleansing myself of these negative emotions is to recognize them, bring them out “into the open,” determine their unnecessariness, and literally, don’t allow myself to feel them.

“The secret of health for mind and body is not to mourn for the past, worry about the future or to anticipate troubles, but to live in the present moment wisely and earnestly.” -Buddha

I can imagine someone saying: “Not allowing yourself to feel the ‘unnecessary’ emotions is not realistic.” I think it is realistic and is done by most humans on a regular basis. For example, consider the negative emotion of being angry at someone. Perhaps, you were “cut-off” while driving on a highway. For most of us, once we realize the anger we feel is unnecessary and won’t do anyone any good, we let it go and no longer feel it. Therefore, we have been emotionally cleansed of that particular anger-emotion.

When I started this post, my goal was to figure out how I could emotionally cleanse myself. I’m not sure if I have completely figured it out, but I do think I’m well on my way. I feel my mind has been empowered with a method that will allow me to reach my goal of emotionally cleansing myself of negative emotions.

This feeling of empowerment is, for me, a newly-recognized emotion that is positive, and in a sense, acts as weapon which can be used against my negative emotions. Ah, perhaps, that’s it! “Speak it…Write it…Draw it…,” is a method that allows me to bring-out the negative emotions and, once they are out and viewed for what they really are — unnecessary, then I’m empowered to get rid of them. WOW!

☞  Using the quote above, here’s my point of view: “What happened to my son, I must accept – I don’t want to know about grief, but I have to learn – I feel I can’t live without my son, but I have to let go!”

← Does A Complex Problem’s Solution Require Creative Thinking?
Are Most People As Happy As They Decide To Be? →

5 Comments on “How Can I Emotionally Cleanse Myself Of Grief?”