What Good Is Done By Offering Constructive Criticism To Loved Ones? 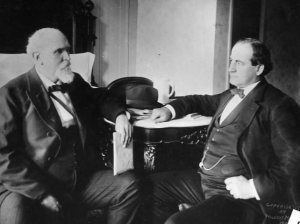 William Jennings Bryan, on the right, (March 19, 1860 – July 26, 1925) was an American lawyer, statesman, and politician. He was a three-time Democratic Party nominee for President of the United States. President Woodrow Wilson appointed him Secretary of State in 1913, but Bryan resigned in protest against Wilson’s policies in 1915. In the 1920s he was a strong supporter of Prohibition, but is probably best known today for his NEGATIVE CRITICISM of Darwinism, which culminated in the Scopes Trial in 1925. Creator: Wilbert Melville Date: Ca. 1900

I do think constructive criticism is a good thing to share, but most of the people I have shared it with don’t agree with me. I have believed for a long time that self-criticism is valuable and essential if a person wants to improve. It seems logical to me that if someone, who is wanting a positive relation with me, offers constructive criticism, then I should seriously consider the offer and, if appropriate, act in a grateful manner. I realize from my personal experience, this is not a normal response.

Ok, so what should I do if I want to keep a close and loving relationship? Perhaps, I should give nothing but praise. Or at least, use the adage, “If you can’t say anything nice, then don’t say anything at all.” That does have merit and usually keeps conflicts down to few or none.

But, if those who have good relationships with me, do not give me constructive criticism, then who will? If everything they say is nice and uncritical, then how will I find out how I truly am from other points of view? My self-assessment will only have input from self-criticism and without the benefit of outside constructive criticism.

I like how you bump AND you don’t hit.

I’m pretty sure that finding fault and blaming does little more than cause resentment and withdrawal. I know that isn’t a good way for expressing a sense of openness toward the person I am trying to keep a relationship with. But, how should I help a person improve that I’m wanting to keep a relationship with? Should I not offer constructive criticism? I don’t know! It seems to me that offering any type of constructive criticism involves a certain amount of finding fault and blame.

Well, as some of you know, I profess to be “writing for learning.” By writing for this post, so far I have learned that I shouldn’t be finding fault or blame in order to make a close relationship stronger. Or, have I learned that?

Perhaps, finding fault or blaming others is fine as long as I keep it to myself and outwardly use it in a positive way. How can I use it in a positive manner? How can I change the negativity caused by blaming and fault-finding to a “warm positive?” How about making a positive statement where I don’t express what I see as not right, but instead, I express what it looks like in a new and “fixed” state?” In others words, focus on creating a mental picture of the benefits of this new fixed state instead of painting a negative picture of blame and fault-finding.

I love being praised while I’m criticized! :-)

What good is done by offering constructive criticism to loved ones? Little good unless it is offered silently. :-)

What constructive criticism do you have?

← If You Change Yourself, Then What Else Changes?
What Does “Freely Give, Freely Receive” Mean? →