I’ve been reading a new on-line newspaper called the St. Louis Globe-Democrat. Actually, it’s a very old newspaper that went out of print and has come back as an on-line only newspaper. (note: since this was published the on-line version no longer exists) In my opinion, it is now a very “right-leaning” paper that is giving a voice to those in our community that want to read what the politically conservative thinking people are writing.

In all fairness, I must admit that our only major newspaper (in St. Louis, MO), the St. Louis Post-Dispatch, is considered by many to be a “left-leaning” paper. I am pleased to see the St. Louis Globe-Democrat come back. In my opinion, we, as readers, are much better informed when we have access to opinions from both sides of the political divide. 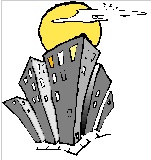 These buildings are leaning both “left & right” :-)

As a blogger and someone who likes a forum where I can easily give my opinion on a particular topic, I have been making comments periodically about one or more of the current issues presented in our papers. When I have commented on the Globe’s website, my approach has generally been an attempt to write as a “voice of reason.”

Many people who make comments on the Globe’s website seem to do little more than criticize one side or the other, without saying anything positive and/or constructive. More than anything else, there seems to be an outcry of “feeling like victims.” This victim feeling is often in reference to national politics, the democratic majority, the right-leaning minority and how our government is being abused by the “liberals.”

Perhaps, what is really happening is that those who feel like victims are suffering from “victim thinking.“ They have accepted, at least subconsciously, the label of victim. They feel that because their particular party is no longer in the majority, that something bad has happened to them and they are in no way responsible for it. Of course, for most of the D1-2K (decade one of the second millennium), the Republicans had most of the political power and control.

During the D1-2K decade, I readily admit that I was a left-leaning citizen. But, I was NOT a victim of the Republican party, Democratic party or our government. I was, as much as any other citizen, responsible for our government. Because I was responsible doesn’t mean I am or was a victim.

Are we George Washington’s political victims?

Many people who give their political opinions, both professionals and amateurs, state how bad our government is because of the other political party, and they are in no way responsible for it. I think that when a citizen gives up responsibility and accountability for our government then that citizen gives up control. They are basically saying, “There’s no hope for the present government and there’s nothing I can do about it.”

The mind of a victim is one of powerlessness. When a person thinks s/he is a victim then the behavior of that person becomes like a victim. This can become a downward spiral that ends in negative expressions and actions. Examples of such negative expressions are last Summer’s town hall meetings, a senator yelling at the president, “you lied,” and destructive rants that many of us have read and heard in our media.

It seems that many people are defining themselves as victims of a political party. I think we should define ourselves by our shared government.  We are all sharing in this government.

Let’s stop blaming the “other side.” Let’s stop feeling like victims. Let’s celebrate and participate in our democracy. As citizens, we should give constructive criticism instead of destructive victimizing.

Are you a political victim?

← Is It Possible To Do Nothing?
When Should You Consider What You Aren’t? →